The assumption seems to be that attraction is the same as lust. Feeling attraction for someone of the same gender must be lust, right? In fact, some of these comments from others seem to indicate that they themselves feel that if they (as a straight man, for example) were to feel attraction to a woman that it would undoubtedly be classified as “lust.” 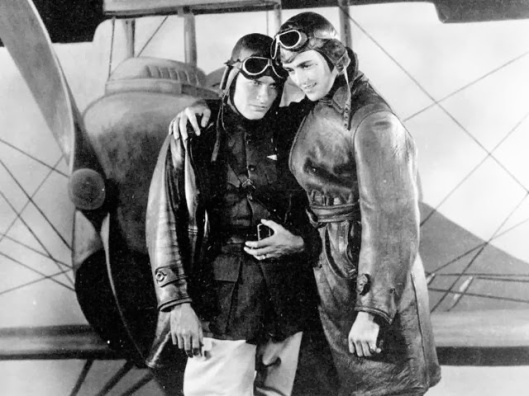 Another close friendship in one of my favorite films: WINGS, 1927.

I had a wonderful friend once. He and I met at a ministry retreat and immediately hit it off. I had a Reformation Study Bible and he had a Spirit of the Reformation Study Bible. It was friendship at first glance, really. We were both gay, but talked about our families, our churches, the music we liked, the books we enjoyed, and our hopes and fears about the future.

I remember the first time he came to visit me. It was so surreal that someone would’ve flown such a distance to be with a friend. At the time, I wasn’t so sure I was worth that sort of investment–but he tried to show me I was. I’ve only recently begun to believe him.

He and I walked down a busy Seattle street once, where the participants from the Pride Parade were clearing out. I was uncomfortable–I’d grown up in a midwestern suburb. The dress, the manner–it all weirded me out, frankly. This friend stopped me and said, “David, Christ died for these people. Do you believe that?”

I was humbled and built up by his presence.

I loved him. With all my heart.

Friends of ours were certain that he and I were dating (or, at least, that we wanted to). They were always suspicious of our closeness–the degree of our intimacy. But there wasn’t anything physical between us. We loved each other. Deeply. Truly.

I remember one of the last times I saw him. He hugged me and told me I was a good friend. The words were a welcome comfort, since this friend really wasn’t very good at emotions. But the comfort would not last because I knew I probably wouldn’t see him again for a long time. I saw him once more a year later. That was 2 1/2 years ago.

My attraction to him wasn’t the result of carnal desire (or whatever the terminology might be to demonize my friendship) or sexual confusion. It was beautiful friendship, forged in the fires of family troubles, theological pursuits, literary appreciation, and my own insecurities. I treasure one memory in particular: on the way to an art museum, we ran out of things to say and travelled in silence. But it wasn’t an awkward one–instead, it was the kind of silence that two people who know each other well appreciate because they are just spending time together. I can’t promise he had the same feeling in that moment; we never discussed the moment. But I’ve held it close to me because it was one of the most intimate moments I’ve ever had with anyone.

Scripture tells me that God does not want people to be alone. Not only does he give spouses, he gives friends. To King David, Jonathan’s love was better than that of women. Their friendship was held in high regard by the Author himself. Jesus himself placed a high value on intimate friendship, the ‘disciple whom he loved’ even seemed to occupy the inside of the king of the universe’s space bubble.

Not of this. My desire for male companionship has fueled my desire for real connection with my friends. I wouldn’t wish that away for anything because it doesn’t come between me and Jesus or anyone else. Instead, I thank God for my close, true friends.

And now, I have to get back to studying for midterms.