Jay Sklar, a professor at Covenant Theological Seminary, has a little ritual in his classes.  In his class greeting, he and the class say,

Start with the Text…

…not with the commentary.

I once sat in a church where, at the beginning of the sermon, the pastor told his congregation that he’d consulted 20 different commentaries, 13 of which validated his interpretation of the text.  Aside from that being only slightly extreme, I think this pastor missed the point entirely of using commentaries.  He seemed to have started with his own presupposition first and then ran a tally count of people who agreed with him, going to the text last. 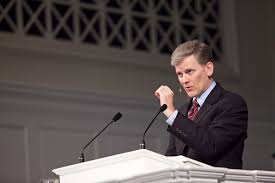 You must think through what Scripture says in order to be able to expound adequately and apply meaningfully what commentators say.  No commentator has room to write down all the implications, insights and truths given in a text.  no distant educator or long-dead scholar knows your situation or your congregation’s concerns.  It is not wise habitually to run to commentaries as the first step of sermon preparation, lest your thoughts start running in a groove carved by one not in touch with what you need to address.

For the pastor I referred to earlier, I  believe part of the reason he was so quick to consult a ridiculous number of commentaries would be due to the fact that he only spent about seven hours, all in one day, preparing his sermons.  This sort of time constraint simply doesn’t facilitate being able to think through the implications of the text.  At best, one can create a meaningful academic lecture in that sort of time frame.

And, to be honest, that is what the sermons usually involved.  There was, in fact, very little of Christ and Him crucified, and many quotations from commentators, be they Hodge or Alcorn (mostly Alcorn).  Did this pastor believe the gospel? By his own profession, yes…but that leads me to the question:  why believe something that has no or little effect on one’s message to their congregation?

So, pastors, start with the text, not with the commentary. And give yourself enough time to do that.

2 thoughts on “Start with the Text, Not with the Commentary”