Today’s post is by a guest blogger, W. Todd Weedman. He’s writing to fellow conservative Christians about why it’s our own fault that gay marriage will be legalized. You can contact him at w.todd.weedman [at] gmail [dot] com.

Do not be misled.  It really is our own fault.

Yesterday’s announcement that President Obama has officially changed his position (1) on the definition of marriage really is a milestone for the cause of the LGBT movement.  Though the decision itself is a “personal decision” for the president and therefore does not change anything legally, it does seem to change something about the argument.  This is the first time that a sitting president has expressed such a position, and that grants a new level of authority to the cause of gay marriage.

As the states gradually continue to assent to the legalization of gay marriage, it is going to be very easy for the church to point the finger of blame at the politicians, but ultimately this perversion of the institution of marriage is on our heads.

In the 1980’s Robert E. Webber and Rodney Clapp produced a rather helpful book (2), which indicted the church in the U.S. with having abandoned her true King and sold her soul to American politicians; first the liberal church to the democratic party in the 1960’s and later the conservative church to Ronald Reagan’s new GOP.  It was a bold claim, but, at some level, we must acknowledge its truth.

My father has always told me that perception is 99.9% of reality.  Well, that may be an over-simplification of epistemology, but not entirely unhelpful.  Perception is actually 100% of an individual’s subjective reality, and if enough individuals perceive the same subjective reality, it will become a cultural reality.  And one can hardly deny that our cultural reality is that the church, indeed, has sold herself out to a lesser master.

A few years ago, the Barna Group conducted a study among Americans aged 16-29, asking about their perception of “Christianity.”  According to the offical release (3) of the study in 2007, “The study explored twenty specific images related to Christianity, including ten favorable and ten unfavorable perceptions. Among young non-Christians, nine out of the top 12 perceptions were negative. Common negative perceptions include that present-day Christianity is judgmental (87%), hypocritical (85%), old-fashioned (78%), and too involved in politics (75%) – representing large proportions of young outsiders who attach these negative labels to Christians.”  In addition (and particularly relevant to the events of the week), the study found that 91% of young non-Christians and 80% of young churchgoers say Christianity is appropriately described as “anti-homosexual.”

Why on earth would this emerging generation have such a perception of the church?  Perhaps we’ve earned it.  How many local churches can truly say that they have loved homosexuals in the true sense?  I’m not speaking of the popular definition of love, which is synonymous with unfettered acceptance of an active homosexual lifestyle (which is clearly contrary to the Christian lifestyle).  I’m speaking of the kind of love that welcomes sinners into a community of sinners, all desperately in need of the Gospel, all growing in grace, all mutually accountable and mutually encouraging as we all flee from sin.  Further, perhaps, after decades of preferring dictation of our moral values via legislation to the inculcation of Christian morality via observance of the great commission we’ve presented ourselves as an American political entity, rather than the bearers of the words of life.  In this we have committed a terrible sin.  Laws do not change people, the Gospel does – and we’ve settled for the former. 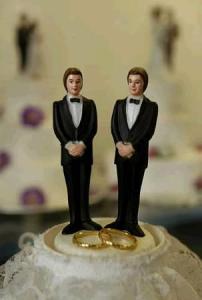 What hath the Religious Right wrought?

As to the matter of homosexual marriage, we’ve none else to blame but ourselves..  At one time, we held the high ground on this issue, but we surrendered it long ago.  After all, marriage is an institution of the church – it has been since creation, when God ordained the first marriage between one man and one woman in Genesis 2.  We’re the ones that gave the state authority over marriage.  Though we would like to blame the government for crossing the line of the separation of church and state, history sufficiently displays that we were the first offenders.

The truth that many of us do not want to face is that we have given our express permission for the government to exercise authority over the church’s institution.  We did it when we chose to make marriage a matter of government authority, pushing legislations and constitutional amendments to define marriage as “a union existing between one man and one woman.”  The fact is that governments do not have any right to define, redefine, sanction, dissolve or even consecrate marriage – but we have told our government precisely the opposite.

Would that we had heeded the teaching of our forebears, such as Robert Lewis Dabney and James Henley Thornwell.  Had we stood steadfast upon our God-given (and constitutional) right to bifurcate the authority of the church court and the civil magistrate, we would likely find ourselves in a very different cultural climate today. Rather, our most prominent leaders over the past 30 years, preachers worthy of varying levels of appreciation, the likes of Pat Robertson, Jerry Falwell, Adrian Rogers, and D. James Kennedy (to name a few), led the church head-first into the halls of government to legislate the law of God, and now we are on what currently appears to be the losing end of a battle that ought never have been fought among politicians.

Clearly this isn’t the end of the story.  Even if “marriage” according to the U.S. government becomes something other than actual marriage, we know that a King is coming to make all things right.  In the meantime, however, I wonder what might happen if the church stopped attempting to redeem culture via legislation and started attempting to redeem culture by the work of the great commission (making disciples in word and in deed), leaning upon the Holy Spirit, who alone can change the hearts of a people.

1. Interview with the President, ABC News.

2. Webber, Robert, and Rodney Clapp. People of the Truth: The Power of the Worshiping Community in the Modern World. Eugene, OR: Wipf and Stock Pub, 2001.

3. A New Generation Expresses its Skepticism and Frustration with Christianity.

14 thoughts on “Here Come the Grooms: Why Gay Marriage Will Be Legalized in the U. S.”